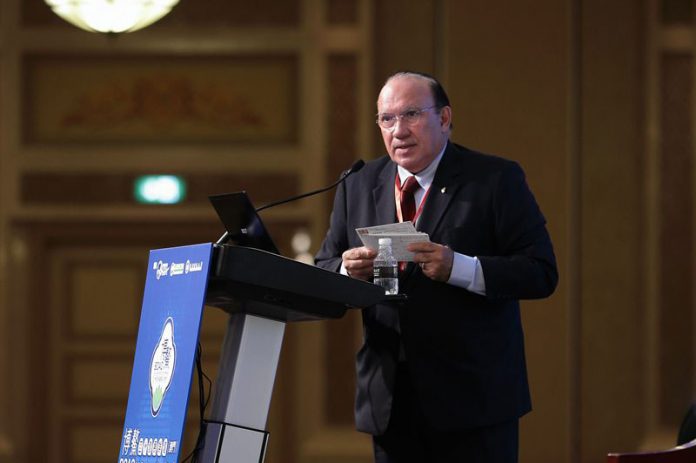 DB had the honor to meet THE tourism expert of Macau, Eng. João Manuel Costa Antunes. He is the former Director of the Macau Government Tourist Office and the current President of Skål International Macau. We invited him to talk about the Skål organization and his experiences in the tourism industry.

Skål International was founded by travel agents in Paris in 1932. According to their official webpage the organization has about 17,000 members in 400 Clubs and is present in 80 nations. Mr. Costa Antunes defines its members as “tourism professionals from around the world. Being a member of this club is a personal recognition.”

Since its foundation, Skål International orient themselves at the vision to ˈbe a trusted voice in travel and tourismˈ. Mr. Costa Antunes addresses this core value when he was asked about the tasks of the Skål organization: “Usually the local Skål Clubs are small groups in different parts of the world that create opportunities to connect with each other. In these relations the term “trust” is one of the most important ones. In my opinion, Skål is a leader in encouraging this value, because we offer opportunities to connect and network with people. In this way trust can be established.”

Skål International Macau is one of those Clubs that follows the same mission as its parent organization: “The main mission of Skål is to network and create business through friendship”, said Mr. Costa Antunes.

The members are highly committed, notes Mr. Costa Antunes and they participate in the Club’s activities which are for example: “Lunch meetings where we can interact, share experiences and receive some news from more up-to-date members.” Another goal of the Club is the further development of Macau as a tourism destination.

That Mr. Costa Antunes is very well connected in the Asian tourism industry, is not surprising. As the former Director of the Macau Tourist Office and as a member of several touristic organizations, he has shaped the tourism industry of Macau. He and his team have turned Macau into the touristic hotspot and the gambling mecca it is today.

Over the years, he witnessed many changes. When he started to work at the Tourist Office in 1987, Macau was seen as “a window for China”. He told us that many Japanese and Korean tourists came to Macau to see a little bit of China. “Many of their countries did not have a relationship with China and many were not even allowed to enter China“, as the Portuguese tourist expert says. During the last few decades China opened itself up to tourism.

The construction of an airport and the abolishment of the monopoly system of the casino operators were two changes with the greatest influence on Macau according to Mr. Costa Antunes. The former “gave tourists the opportunity to fly into Macau directly” and the latter “opened up new opportunities for international investors.”

Yet, Macau has more to offer than a paradise for gamblers. “Macau has a rich heritage and it is a unique destination”, as Mr. Costa Antunes reminds us. In 2005 the historic center of Macau was added to the UNESCO World Heritage List. Not surprisingly, this affected the former Portuguese city in a positive way according to Mr. Costa Antunes: ”This recognition did not only change the opinion of foreigners and tourists, but also the locals suddenly looked at Macau in a different way. The citizens of Macau recognized the potential of their city and now they fight for their heritage.” Also the fact that this happened upon Mainland China’s recommendation is important: “This is an honor and a reminder that Macau is part of China”, said the former Director.

Macau belongs to the Pearl River Delta cities, so it could be assumed that they are one touristic region. However, this point needs improvement in the opinion of Mr. Costa Antunes: “There is still a lack of information regarding the potential of the Pearl River Delta region. Many internationally important events are happening in Macau.” With the air show, Zhuhai also enjoys some international exposure. These happenings could be used more efficiently in the view of Mr. Costa Antunes: “It is necessary to make our people understand that having an event in Zhuhai, also means having an event in the region from which all the surrounding cities can benefit.”

At last, when asked about his favorite place in Macau, he was not sure how to answer: “If I mentioned just one or two spots that would not do justice to Macau.” For ours sake, he chose one place – a place with a personal meaning: “I have a special connection to the Senado Square. “I was the Vice Chairman for 2.5 years of the ˈLeal Senadoˈ, during the time that the square was being closed for traffic.” The Largo do Senado is part of the historic center of Macau and is used for many cultural activities and celebrations. But it was not always like this. It used to be a very busy place with high traffic.

Mr. Costa Antunes noticed the importance and the potential of this spot: “Due to our experiences in urban planning, we realized that this was the heart of the city. We had the idea to close the square for traffic and turn it into a walking district. It was not an easy undertaking, because many shops and association were located there. They were afraid that their businesses would be negatively affected by the missing traffic. Nevertheless, the Council wanted to try to implement this idea.” They reorganized the square overnight and the next morning they could hardly believe what they saw: “There was a huge crowd of people: some were sitting, others were standing in groups talking and children were playing.” This showed that they had taken the right decision. And Mr. Costa Antunes’ conclusion is beautifully figurative: “My heart is probably attached to the heart of Macau.”