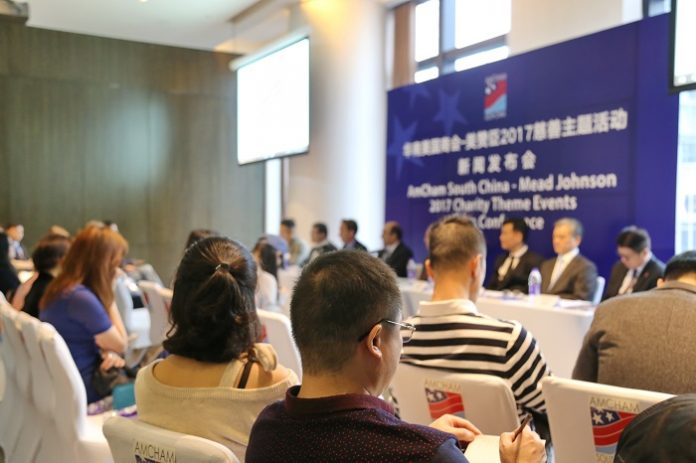 AmCham Endeavors to Save Lives of Orphaned Children in Need of Immediate Life-saving Surgery,
Helps Raise the Impoverished Wuxing Village and the Nearby Villages above the Poverty Line 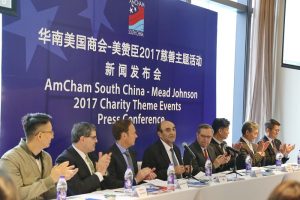 This year’s program is co-organized by Guangzhou People’s Association for Friendship with Foreign Countries, Guangzhou Charity Association (under Guangzhou Civil Affairs Bureau), Guangzhou Youth Development Foundation, and Guangzhou Women and Children’s Medical Center, aiming to raise donations of material and funds. The in-kind donations will be distributed to Guangdong’s impoverished Wuxing Village (part of Meizhou City) and other poor villages later this year and early next year. Additionally, cash donations will be used to finance medical treatments for orphaned children at Guangzhou Women and Children’s Medical Center and to help the poor villages. All donations will go through Guangzhou Youth Development Foundation with proper receipts issued to the donors.

AmCham South China President Dr. Harley Seyedin has disclosed the plans and beneficiaries. He has also noted that weeks before the official launch, Mead Johnson Nutrition and Jingxing Real Estate had already pledged RMB200,000 and RMB100,000 in cash respectively.

In its second consecutive year, AmCham South China will organize an inspection tour to Wuxing Village and the nearby impoverished villages in mid or late January, 2018. According to official statistics, Wuxing Village, located in Wuhua County of Meizhou City, covers an area of 11.5 kilometers and owns a population of 4,034 people, comprising of 82 relatively poverty-stricken households (252 people). Before the Chamber’s charity efforts, Wuxing Village was home to 157 poverty-stricken households (909 people), a preliminary census shows. Since the “targeted measures to help people lift themselves out of poverty”, a concept put forward by Chinese President Xi Jinping, 39 households (93 people, 36.9% of the Village’s poverty-stricken population) have been raised above the poverty line in the Village. Also, the Village has changed from none to some in adding windows to its primary school, a separate workplace to its committee, a public health station for the villagers, and a one-kilometer road to its neighboring village.

This is the 8th consecutive year of AmCham’s overall charity activities. In the past eight years, AmCham South China has collected cash donation of RMB4.73 million and in-kind donation worth RMB6.57 million for children in severe condition and four impoverished villages. As a foreign non-profit organization with long-term dedication to the public welfare, AmCham South China calls for more attention from all sectors of community on the development and growth of the poor population and the children in severe condition with a purpose of cultivating a broader future for them.

Events planned under the cooperative efforts include:

1. Press Conference on November 30th, 2017
– To inform the press and the public about the background and action plan of the Charity Theme Events and to build awareness of the need for philanthropy and to collect donations for initiating poverty alleviation projects in Wuxing Village and orphans in need of medical treatment.
– To call for more donors’ participation.

2. Inspection Tour of Wuxing Village and Other Poor Villages in mid/late January, 2018
A corporate delegation with experts and potential investors will visit Wuxing Village for projects, accompanied by a team from the Guangzhou Women and Children’s Medical Center who will provide free medical services to villagers, and build awareness of the need for philanthropy.

The mission of the American Chamber of Commerce in South China is to promote the development of trade, commerce and investment between the United States and the People’s Republic of China with a special focus on South China; to provide a forum in which member businesses can identify their common interests and discuss solutions for common problems; to work with and advocate member interests with relevant organizations in South China, elsewhere in China and the United States, and to set the standards for corporate social responsibility for the community that the Chamber serves.¬

Mead Johnson has a proud history of over 110 years and is a global leader in infant and children’s nutrition. The company has been committed from its very beginning to nourishing the world’s children for the best start in life. Mead Johnson has a workforce of approximately 7,700 dedicated employees worldwide. The company manufactures and markets more than 70 products in over 50 countries. Those innovative products deliver tangible, often clinically-proven developmental and health outcomes, and have helped Mead Johnson earn the trust of millions of parents and health care professionals.

In June 2017, Reckitt Benckiser, one of the Top 500 enterprises, announced the completion of the acquisition of the Mead Johnson Nutrition Company. Mead Johnson will initially operate as a separate division within RB.

About Mead Johnson Nutrition (China) Ltd.
Mead Johnson Nutrition China was founded in 1993. Our manufacturing facility is located at Dong Ji Xia Yuan Road in the Guangzhou Economic and Technological Development Zone. It covers an area of 60,000 square meters and boasts some of the world’s most advanced production processes and technology. Currently, the company’s sales network is established in 29 provinces, autonomous regions and municipalities nationwide.

Mead Johnson strives to advance its leadership role as part of the healthy growth of the entire pediatric nutrition industry. The company has operated strictly under its first-to-market “All-Rounded Safety” quality management model and GMP standards across its manufacturing, supply chains, storage and distribution networks. Having been awarded ISO9001:2008 certification, Mead Johnson China adheres to HACCP principles and meets all national food safety and hygiene standards.

With deep roots in China extending back 24 years, Mead Johnson is committed to delivering professional care and support to Chinese consumers by providing high quality nutritional products for pregnant women, infants and children and sharing our advanced knowledge of pediatric science through various activities to enhance the awareness of the importance of early childhood nutrition among young Chinese parents.

About Jingxing Company
Jingxing Company started business in 1985 in Import and Export field, working with the renowned electrical brands such as Haier, Gree and Midea. With them the business achievements of Jingxing Company were excellent. In order to broaden the business platform, Jingxing Company has entered the Real Estate field in 1995 and formed Guangzhou Jingxing Real Estate Co., Ltd. Now, Jingxing Company has become an integrated enterprise with interests in residential real estate, property management, hotel, business trades and commercial real estate development. The total asset of the company exceeds RMB6 billion and has over 200 employees. The company abides by “improve living quality, elevate construction quality” as its responsibility, keeps the rule to optimize the city functions and advocates quality living.

Nowadays, Wuxing Village needs to address major issues of employing the poor population, renovating the mud buildings, and educating the young generation. With the help from supporting organizations, Wuxing Village has built a separate workplace for its committee, a public health station for its villagers, and a one-kilometer road to its neighboring village.

The village is improving their living condition by cleaning up the chaotic piling-up of old junks, wires as well as demolishing dilapidated buildings, ruins, broken oxen, and open-air toilets. With the help from supporting organizations, the village has established a long-lasting garbage collecting system.

About the Guangzhou Charity Association-Guangzhou Civil Affairs Bureau
Founded on June 5th, 1994, Guangzhou Charity Association is a registered citywide charitable society and individual volunteers group approved by the municipal government. The association is committed to promoting the spirit of humanitarian, contributing to poverty alleviation, and helping people with less fortune and people in need. It promotes awareness of charity, and exploration of fields of charitable services. It calls for the society to contribute to funds raising, emergency rescuing, care for senior people, orphans and medical treatments, and volunteer teaching, so as to help the people in need. The association has established a transparent charity information platform and explored more channels for public involvements of charity in order to help accelerate innovative development of the philanthropic industry. In the past 21 years, the fund raised by the association has added up to RMB2.46 billion and fund donated added up to RMB2.17 billion. For its great contribution, the association has received “Extraordinary Award for Philanthropic Industry in China”, “Charity Award in South Guangdong Area”, “2014 Excellent Social Group in Guangzhou”, and “5A Grade Social Group in Guangzhou”.

About Guangzhou Youth Development Foundation
Guangzhou Youth Development Foundation (hereinafter referred to as GYDF) was founded in May 4th, 1994. This public foundation was co-founded by Guangzhou Committee of China’s Communist Youth League, Guangzhou Youth Federation and Guangzhou Working Committee of Young Pioneers. For a long time, GYDF has attracted broad attention and support from all sectors of society. Meanwhile, it has received guidance and assistance from central, provincial and municipal authorities. It’s not only a public funding agency, but also a private foundation and social organization. It raises public fund in Guangdong province, while receiving voluntary contributions, investment income and other lawful income from organizations, natural persons and legal persons.

GYDF aims to rally fund and material support for development of Guangzhou teenagers’ career by connecting with enterprise & public institutions, social organizations, other organizations and individuals home and abroad; to carry on helping orphans and the poor in their study; to develop first aid service; to subsidize all districts and institutions in Guangzhou to hold various activities which benefit for teenagers’ physical and psychological health; to support and promote studies of teenagers’ problems; to award excellent teenagers and social organizations and individuals who make contribution to teenagers’ career.

Since its establishment, GYDF has taken an active participation in social welfare with support from different sectors of society. It promotes “Help the Disadvantaged”, devotes itself to building a harmonious society, dedicates in helping poor students to learn. When the whole nation was faced with natural disasters, GYDF united and led the municipal youth to devote in earthquake relief. This manifests noble spirits of great love in Guangzhou.

Through development of 20 years, GYDF, with the help of public, has advanced with the times and solicited social resources, made a greater contribution to social welfare by building its website and Weibo, and organized voluntary service groups to broaden serving fields for teenagers.

About Guangzhou Women and Children’s Medical Center
Guangzhou Women and Children’s Medical Center (GWCMC) was established with the integration of the former Guangzhou Children’s Hospital and former Guangzhou Maternity Health Care Center. Covering an area of 37 thousand square meters and a built-up area of 130 thousand square meters, the hospital is equipped with 1400 beds. Among the 2603 staff, 282 are holding senior titles, 573 have received master level education or above and 47 of them are MD or MS mentors. In December 2012, GWCMC became the first public hospital in southern China to earn JCI accreditation.

The Hospital has greatly enhanced its capacity building. Three specialties have been honorably recognized as National Key Clinical Specialties entitled by the Ministry of Health, including Respiratory, Gastroenterology and Pediatric Surgery; six as Guangdong Key Clinical Disciplines or Specialties, and one as Key Medical Laboratories listed in Guangdong “12th Five Year Plan”. It has been authorized to set up National Post-Doctoral Research Station. Affiliated to Guangzhou Medical University, it also serves as a teaching, training and internship base for Sun Yat-sen University, South China Medical University and Jinan University Graduate School.

The hospital has evolved to a high-level, comprehensive and multi-disciplinary health care institution, integrating the function of medical and healthcare, prevention, research and education.

“Caring for women and children with benevolence and expertise” remains at the core of the hospital’s mission. Our culture stems from the motto of “Integrity, Professionalism, Endeavor and Diligence”, and core value of “Love, harmony, prudence and practical”.