In recent years, the government has introduced a number of policies and reforms to improve investment conditions and the ease of doing business in China. Many experienced China hands assert that these reforms are often a case of “two steps forward, one step back”, but this view overlooks a broader positive regulatory trajectory that competitive foreign investors can manage to their benefit.

The government’s new Cybersecurity Law, and its data localization requirements, caused some foreign investors to lose confidence in China. New processes for business registration and work permits have frustrated China-based expats that are used to the status quo. Within the larger reform trajectory, however, constructive observers find more practical reforms designed to help the country transition from an economy driven by heavy manufacturing, to one led by technology and innovation.

Revisions to China’s Foreign Investment Laws, which came into effect October 1, 2016, replaced the previous ‘case by case approval system’ with a system based on a national negative list combined with record filing.

The ‘national negative list’, i.e. the Catalogue of Industries for Guiding Foreign Investment consists of ‘restricted’ and ‘prohibited’ sectors as well as industries for foreign investment. Those listed as ‘restricted’ would still be subject to Ministry of Commerce (MOFCOM) approval, while ‘prohibited’ industries are strictly out of the question – while those not listed in the negative list are open, subject only to record filing.

July 10, 2017 saw a new iteration of the negative list that further lifted restrictions on a number of key industries and cut ten items and 27 special administrative measures from the 2015 negative list.

Measures guiding record filing were released on October 8, 2016, and apply to the establishment and alteration of key information or scope of FIEs. Record filing can be done online by the representative or agent of the FIE after obtaining pre-verification of the enterprise name, and before or within 30 days of issuance of its business license. The record filing system also applies to acquisitions of equity or assets of domestic companies by foreign investors, one of the more common methods of foreign investment into China.

The company name registration and approval process is being simplified. On October 18, 2016, the State Administration for Industry and Commerce (SAIC) called for the creation of local city-level company name databases, which was further expanded to all levels of government on April 19, 2017.

Along with this, an online company name registration system was established; it is able to analyze company names autonomously, and reject those already in use or that violate restrictions. If the system verifies a company name, the local registration authority will notify name approval within three working days.

For enterprises with a business scope that falls outside of the national negative list, all required documents for corporate establishment filing can now be uploaded to MOFCOM’s online management system. Digital confirmation of successful filing will be issued within three working days. If MOFCOM requires additional documentation or clarification, this will be made clear within 15 days.

For companies operating in restricted categories, approval can also be initiated through the online management system, with a shortened approval time of around five working days. It also removes the need for M&A prophase reports for application.

An online registration system for the new license will be implemented nationally by October 2017, which will be able to process application documentation and the issuance of an electronic business license with the new single social credit code. Because of this digitalization, the license will be interoperable among relevant departments.

On March 5, 2017, China’s Premier Li Keqiang presented a plan to cut the tax burden of businesses, recalling how the VAT reform cut tax burdens for businesses in every sector by a recounted RMB 570 billion (US$85 billion). He pledged to further cut business tax burdens by RMB 350 billion (US$50.7 billion) in 2017 by keeping the year’s deficit to GDP ratio unchanged. The tax cuts were primarily aimed at smaller tech companies.

In addition, from January 1, 2017, venture capital firms in Beijing, Tianjin, Hebei, Shanghai, Guangdong, Anhui, Sichuan, Wuhan, Xi’an, Shenyang, and the Suzhou Industrial Park, are eligible for taxable income deductions on 70 percent of tech firm investment at the seed stage. Investments made up to two years prior to this date can also apply for this benefit.

Another facet in the tax cut efforts was a simplification of the VAT regime on July 1, 2017, which reduced the four brackets of 17 percent, 13 percent, 11 percent, and six percent, into three by removing the 13 percent bracket. Items such as agricultural products and produce, fuels, books, media products, and salt were reduced to the 11 percent bracket. The main impact of this alleviates tax burdens of businesses in the respective industries, up to as much as RMB 1.6 million (US$237,000) per entity.

A draft fourth revision of China’s Patent Law was released on January 1, 2016 for public consultation. Though the revisions have not yet come into force, strengthening of patent enforcement and broadened design patent protection shows the current trajectory for patenting in China.

In particular, statutory damages have been expanded fivefold, from RMB 1 million (US$155,000) to RMB 5 million (US$776,000). It also seeks to empower administrative enforcement of China’s ‘dual track’ patent prosecution system, in which a patentee has the ability to choose between judicial and administrative remedies for encroachment, increasing the Patent Administrative Department’s power to exact enforcement.

China’s National Copyright Administration has announced a third revision of the Copyright Law, focusing on developing the protection of right of communication through information networks, copyright collective management, the establishment of a service platform for copyright registration, and strengthened implementation of the law.

On April 1, 2017, China’s State Administration of Foreign Experts Affairs (SAFEA) rolled out national work permit reforms. Previously, the Alien Employment Permit for Z-visa applicants and the Foreign Expert Permit for R-visa applicants were issued by the labor bureau and the SAFEA respectively. They have now been unified under SAFEA into a single document with a permanent unique ID number issued to all foreign employees.

The reform introduced a tiered ranking system that categorizes applicants as ‘A’, ‘B’, or ‘C’, according their ability and experience under a point system determined by factors such as annual salary, age, and Mandarin proficiency. They can also directly qualify for a tier if conforming to certain criteria: for example, experience in senior management or technical positions at a Fortune 500 company would qualify for tier A.

This system helps HR departments build a clearer picture of the classification of expatriates, and the corresponding requirements and procedure for work permit applications. Employers can now submit applications to hire foreign workers through an online management system, requiring fewer documents than before, up to 50 percent less upon full implementation of the system.

Local measures to attract skilled workers have also benefited foreign businesses, with around 193 region-specific programs to attract or reward foreign talent, as well as a series of smaller pilot programs and other incentives. For example, subsidies of up to RMB 100 million (US$15 million) were made available for start-ups engaging scientific and high-tech talent this year in Shenzhen.

Beijing’s Chaoyang and Shunyi districts now accept applications for permanent stays, long-term visas, and port visas for highly skilled foreigners in the service sector, foreign members of start-ups, and young foreign students, starting on May 2, 2017. A similar program was launched in Shanghai’s Pudong district on June 16, 2017.

On January 6, 2017, a reform targeted foreign master’s graduates from Chinese and ‘well-known’ overseas universities, cancelling the two years of work experience requirement to apply for a work visa. 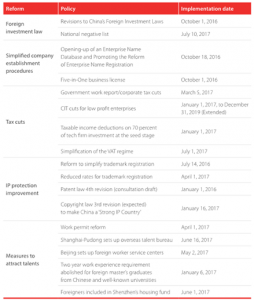 The government’s intent to attract foreign investment and talent has manifested in a high number of pro-business reforms initiated in recent years through trails of pilot programs and gradual implementation, signaling a positive overall reform trajectory for foreign companies.

However, not all measures will directly benefit foreign investment in practice; higher thresholds will produce hurdles in administrative processes, something evident in the results of the work permit reform. Nevertheless, a reoccurring theme throughout reforms across the board is the digitalization of application procedures, which will dramatically cut paperwork and processing times. Disparity between design and implementation of policies may hinder effectiveness in the early stages, but in retrospect, this is likely a transitory phenomenon.

Regardless, the string of pro-business reforms reveals that the government recognizes the role of foreign business and talent in its effort to maneuver its economy towards one based on high value-added services, such as finance and technology.

As a reminder, if you choose to publish any of our content, please include the following caption at the end of the article: