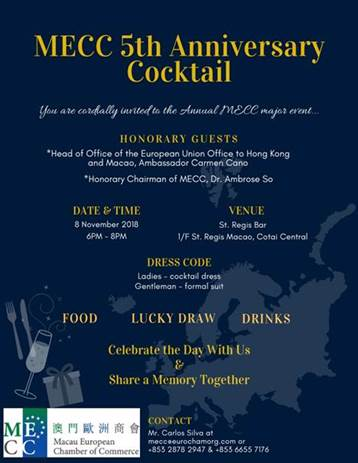 Only 3 WEEKS until we celebrate MECC’s 5th Anniversary.

It is with great pleasure that the Macau European Chamber of Commerce presents the highly anticipated Anniversary Cocktail 2018.

This year MECC celebrates its 5th Anniversary of its foundation by José Manuel Durão Barroso, erstwhile President of the European Commission.

MECC cordially invites your honourable presence to our Fifth Anniversary Cocktail which will be held at St. Regis Bar, 1/F The St Regis Macao, Cotai Central on Thursday, 8 November 2018 from 6pm to 8pm.

Head of Office of the European Union Office to Hong Kong and Macao, Ambassador Carmen Cano, and Honorary Chairman of MECC, Dr. Ambrose So will be guests of honor.

And, there is our usual high value lucky draw so an unmissable evening all round.