Great theatre plays make us better! A man who used to be a Actor, theatre director, and a film director said.

How did you become involved in Theatre? 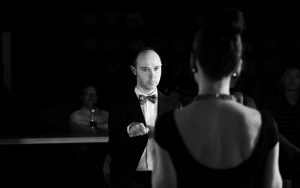 I’ve been acting since my young age: at school, then in University and Ecole Normale Supérieure in Paris. After the cinema school (FEMIS), I worked as a director on documentaries for pedagogical television and then for the cultural channel, Arte. Beside my work as a director, I went on acting: training myself in different workshops with some very good coaches, getting some small parts in movie pictures and sometimes playing for theatre. I’ve always been fascinated by the work of the actor: by all it needs to be done to get into a character, by the « Magical part » of it. So strange to become someone else!

Why did you choose to come to China?

Somehow I didn’t choose. My father had a very close friend here in Guangzhou and he was coming every year to stay a couple of months. I had the opportunity to come, so I came. And then my father died, in France. After his funerals, I came back in China and I found myself alone in Guangzhou. I discovered why he liked to be here. And it was the same for me. Feeling so good in Guangzhou. So I decided to stay!

You have been a teacher, actor, producer and director – which has been your most challenging role?

Each time I did something, I learned a lot. Moreover, when I don’t like to do something, I am not doing it. Life is so short. In the performing arts, like cinema or theatre, you really improve yourself when you work on master pieces or work with people who had experiences on master pieces. When you are lucky to have this opportunity, you can just see the difference and do the right things. I trained myself as an actor with Jack Garfein (Actor Studio) who has been Elia Kazan assistant on Baby Doll, and I also worked a lot with Françoise Lebrun, the French actress in La Maman et la Putain from Jean Eustache. My best experience in documentaries is Romanes, gypsy circus because I followed Alexandre Bouglione and his circus during one year: circus is the true spirit of the performing arts and the Bouglione are one of the most famous family in the European circus. In cinema, I’ve been Dean Tavoularis (production designer) assistant on two Roman Polanski’s films. Dean has such a talent and a way to understand and to create a proper space and a proper world for a movie picture: I will never forget that. As an actor, I played Richard II in the Shakespeare play: it was the best thing of my life.

How did you come up with the idea to set up a French Theatre Workshop?

Theatre is one of the best way to understand the world and the human relationships.

Great theatre plays make us better! It is also the best way to understand the culture and the spirit of other people, of other countries. France has a huge tradition of theatre and China also. Create a workshop where Chinese and European people could work together was an evidence: the best way to create a link between the cultures and the people.
What have been your favourite performances to come out of your Workshops?

I created a musical with teenagers two years ago. It was a real good time and a very creative work: from writing to acting and singing. I also like a lot Des hommes et des femmes, this year performance in Guangzhou. The texts are from now in France, talking about our life and our world here and now. The « Mirror » effect is very interesting, even if things are different between the western way of living and the Chinese way. The work with the group was very interesting, with very different people: from China, from France, from Italy, men and women, of all ages… understanding so well each other! It was such a good and creative atmosphere, with people respecting all the differences. That’s why I like this performance, and I am glad that Chinese people also like it.

How does the Theatre Community here compare to France?

I’ve been here for just one year, so it is complicated to answer such a question! But for me, there is not enough theatre and cinema, created in China. The local production is the most important : people must tell and create their own stories with their own values and way of thinking! The influence of western blockbusters and silly tv programs is already too strong, as everywhere in the world. The theatre is one of the best way to resist to this influence and to try to make people free and conscious. A strong theatre community could also be the start of an author films community.

What can we expect from your next Performance?

We didn’t have time to make Chinese subtitles for the last performance. We are actually doing this work. We will show again Des hommes et des femmes, with Chinese subtitles, to allow more Chinese people to see the performance: in Guangzhou, but also in some festivals next year, in Shenzhen, in Shanghai. The workshop will also start again in next September and I would like to work on scenes of classical plays, from 17th century to beginning of 20th: as always, the final choice will depend of the group, but it could be the performance for next year.