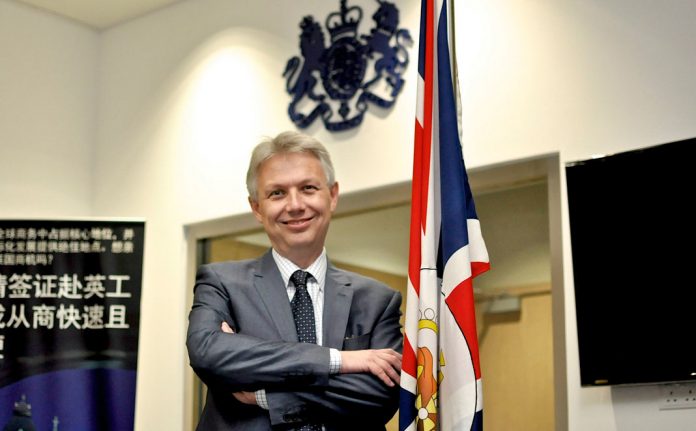 The GREAT Campaign of the U.K. has generated a huge interest in the past few years in China in terms of culture exchange and economic cooperation. With the launch of the U.K.–China Cultural Year, there will be an even wider and deeper communication between two countries. Sitting in the new office of the British Consulate-General of Guangzhou at IFC, Matthew Rous, HM Consul General of Guangzhou shares with DB his latest updates.

DB: How have you become a Consul-General? Have diplomatic relations always been your passion?

Matthew Rous: I joined the Diplomatic Service when I was 27, relatively late compared to many in my peer group who joined right after university. But things are changing now as the Foreign Office tries to target people with more skills and life experience. I think my passion for diplomacy started in my childhood because my family moved to Argentina when I was very young. I got a taste for living in foreign countries and learning different languages. Although it was many years before I formed a firm plan to join the Service, I always wanted to be in a role that would enable me to work to bring different countries, and different people together.

DB: You have been in different important roles in diplomatic relations in different countries. What’s your impression for Guangzhou?

MR: “Busy”, “Open”, “Green” and “Friendly” are the adjectives I would choose for Guangzhou. If I had to describe Guangdong as a person, I would say that person would be outgoing, noisy and colourful. Guangdong is a very stimulating place. I am planning to get out and about and travel to meet as many people as I can during my time here.

DB: How would you describe the economic character of South China? How does it affect the business and investment relationship between South China and the U.K.?

MR: South China is an increasingly sophisticated commercial partner. It is very important in terms of the U.K.-China economic relationship. Promoting economic and commercial relations is the single biggest reason why we have this British Consulate-General in Guangzhou. Guangzhou is at the heart of this region. It is quite simply the most dynamic and exciting city which I have lived in. We try to maintain a broad engagement across all kinds of sectors. South China is the richest Chinese region in terms of per capital GDP, so we have been paying a lot of attention to the consumer market, retail, education, financial services, and ICT (Information & Communication Technology) fields. The other big opportunity is energy cooperation and development where there is a lot of investment going both ways. We are trying to promote the U.K.’s renewable energy technology in China, for example, the U.K. has world’s most advanced technology in terms of offshore wind.

MR: The great thing about this year of cultural exchange is that it is the first time for the exchanges to go both directions. The U.K. and China are working closely together to push out the message. The purpose of a year of cultural exchange is to introduce people to things they didn’t know about before. The U.K. has got quite a strong brand in many areas including culture and education. During this year, I hope that people will get the appetite to discover more about modern, young, exciting and vibrant British culture.

DB: What are some of the major events that the British Consulate General Guangzhou is working on for this year?

MR: The general election in the U.K. will take place very soon. The elected government will determine the direction for our promotion activities overseas. But China will I am sure remaining a key focus for the U.K.’s economic future. U.K. Trade and Investment are able to work with U.K. businesses to develop the highest value of opportunities. We are looking to promote not just trade but investment both ways. In this new office here in Guangzhou, we are co-located with two other organizations, the China British Business Council and the British Chamber. Together, we can reach out to partners, large and small, offering different types of products and services.

DB: The GREAT Campaign has been very successful in China. Could you please outline a few of the achievements?

MR: The GREAT Campaign is an ongoing promotion. We have been doing it for a couple of years now. In South China, it has taken shape in many initiatives, such as Fashion is GREAT and Film is GREAT. Even though it has only been a short time since my arrival in December 2014, we have carried on with projects such as Entrepreneurship is GREAT in Shenzhen which introduced people to each other and helped to promote mutual awareness of potential opportunities. This is an ongoing process that once you raise people to a certain level of awareness, the key thing that we want to do is to get them to visit the U.K. Because when you visit the U.K. then you really gain a much deeper understanding and appreciation of what the U.K can offer.