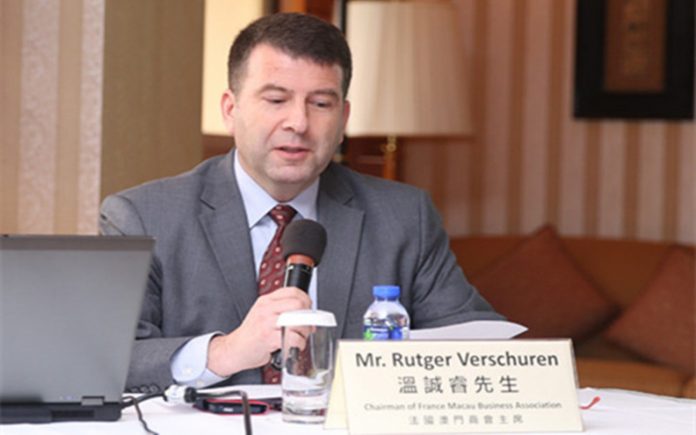 France Macau Business Association (FMBA) is a non-profit organization, created with the strong support of IPIM and the Consul General of France in Hong Kong and Macau. Its objective is to promote and foster business relations between France within the European community and Macau within the Pearl River Delta, as well as to provide a forum for networking and access to information. FMBA is managed on a voluntary basis by a group of business leaders and is chaired by Mr. Rutger Verschuren, who took over from Mr. Franklin Willemyns in late 2014.

FMBA Charity Gala Dinner is one of the most anticipated event in Macau this month. DB briefly interviewed Mr. Rutger Verschuren at the Grand Lapa, inviting him to talk about the upcoming gala.

DB: Why did FMBA this year choose to support Architecture Sans Frontieres – Macau?

Mr. Rutger Verschuren: “Every year we select different organisations who we feel are doing something outstanding and noble. This year, ASF Macau exceeded our expectations so we chose them. Another reason which attracted us to work with this particular group is the fact that it is both a French structure and a local organisation. This is important for us because we will ideally find it easier to communicate with an organisation which is based here in Macau. Also, by coincidence, we met Mr. Dominic Choi, the founding president of ASF Macau, at a monthly breakfast meeting that is held by the FMBA and which is attended by Macau local business communities and associates. We spoke to Dominic and instantly found a connection when we discussed our local project ideas”.

DB: Will any other Charity be supported this year?

Mr. Verschuren: “Well, I feel that at this moment, FMBA should concentrate on supporting ASF Macau, whose funds actually go through The Cradle of Hope Charity. So we support directly ASF, but they are preparing a project which benefits The Cradle of Hope and which consists in taking care of abandoned babies and children”.

DB: Are there any highlights you would like to mention about the coming FMBA Charity Gala Dinner?

Mr Verschuren: “The elite of Macau will attend the event and the theme of this year’s Gala is 1920/30’s old rich Shanghai, so you can expect a lot of fantastically dressed people! A very famous jazz band has been booked and a food tasting session will take place at the MGM, Macau. It’s going to be a great show”.