Shangri-La Hotel, Guangzhou especially invites the Vienna Boys Choir, the national treasure of Austria, to sing exclusively on 29th October, at “Music in the Park”, the hotels’ popular seasonal outdoor BBQ family lunch event with music, at the hotel garden that stretches over an area of 5,800 square metres. Since 2014, Shangri-La Hotel, Guangzhou has collaborated with the choir and successfully delivered three cultural exchange events that have impressed many families who seek quality time with a divine music experience. 2017 is very special for both the hotel and the Vienna Boys Choir, as Shangri-La Hotel, Guangzhou is celebrating its 10-year anniversary and the Vienna Boys Choir was listed as in March 2017 an UNESCO Intangible Cultural Heritage with its educational system and singing tradition. To mark this milestone and the extraordinary friendship shared by both parties, the hotel will continue the tradition of Music in the Park with the Vienna Boys Choir as an exclusive opportunity for family guests to embrace again their heavenly voices. In addition, to make this cultural exchange event more interesting, the hotel has also invited artists to demonstrate a remarkable modern fusion of the violin and handpan, a trendy musical instrument that resembles a simpler version of a steel drum. An outdoor BBQ buffet lunch with the Vienna Boys Choir, a smart fusion of classical and contemporary musical genres, with a picnic style gathering at the hotel’s vast garden, this will definitely be an awesome Sunday for the entire family.

The Vienna Boys Choir enjoys a history of over 500 years, with a well-established tradition in professional musical education and vocal training. It consists of four choir groups, each of which has 25 members and is named after one gifted Austrian composer associated with the choir’s history, namely, Bruckner, Haydn, Mozart and Schubert. Each of the four choirs recruits young talents from around the world who will go through rigorous music and vocal training in Vienna. The choir starts their global tour for cultural exchange events once they reach ten years of age. As the tradition goes, each season, the entire Vienna Boys Choir says farewell to a number of members who move on to the next stage of their study and welcomes new children. Given the Vienna Boys Choir’s cultural exchange touring pattern, the odds for Canton music fans to meet the same group of boys in two years are low. Therefore, each experience with the choir in one touring destination is always unique. 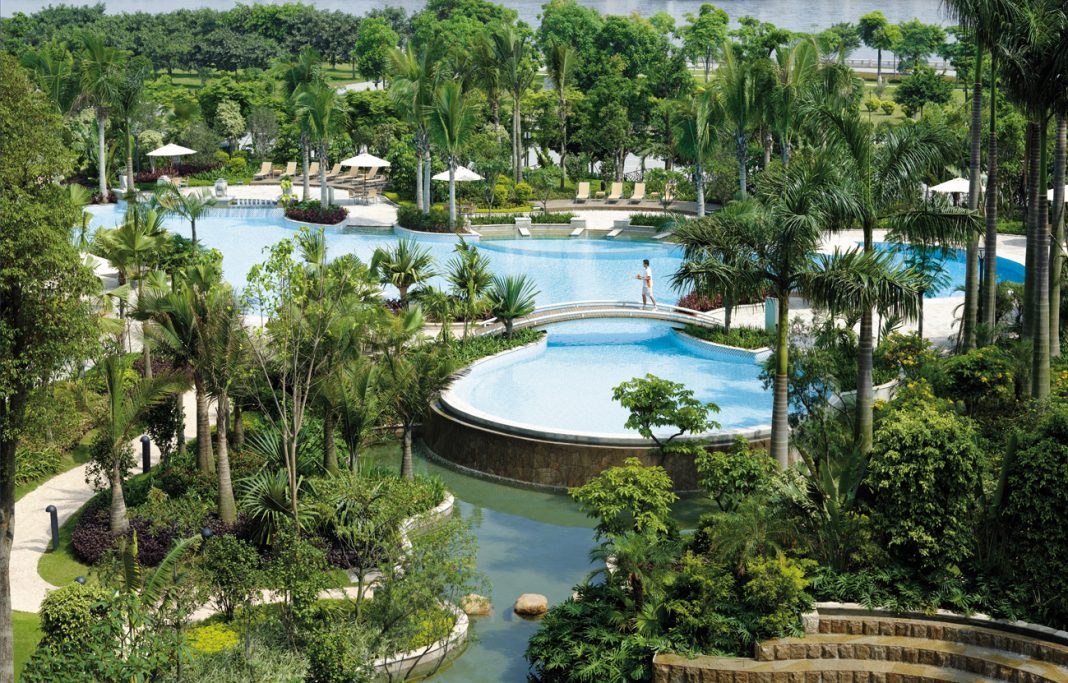 The Vienna Boys Choir is characterized by the classical music works, in particular, music masterpieces from Europe. The chorus repertoire includes serene church music, romantic and elegant art songs, melodious country ballads, as well as the Strauss family’s most popular waltzs and comic opera. To commemorate the 150th Anniversary of The Blue Danube’s premier, the Vienna Boys Choir will bring with them some classics from countries along the Danube river such as < O Fortuna> as well as the Bulgarian folk song < Beautiful Dilmana>.

Fun Music Fusion for Family Gathering
As a wonderful blend of cultural exchange and family gathering, the Music in the Park also involves interesting music expression. This year the hotel invites handpan players and a violin player to demonstrate a contemporary music fusion in a light beat. The crisp note from the handpan and melodious tune from the violin will enhance the relaxed atmosphere in the garden. A handpan is in the shape of a wok, it is a light weight musical instrument that can produce eight notes. It is played by hand, perfect for improvising and interactive performance. Children may get a chance to learn how to play this instrument in the lunch event.

Music in the Park with the Vienna Boys Choir lunch event starts from 10:30 a.m. to 2:30 p.m. on 29th October, 2017. This family-oriented outdoor lunch event with the Vienna Boys Choir and visiting bands is a picnic-style gathering with a selection of barbecue items on the beautiful lawn. The admission fee is RMB300 nett per adult and RMB200 nett per child, free for children under 4 years old.

The hotel also offers the Music in the Park Room Package from RMB1,560 with multiple benefits, including:
·  One-night stay in a Deluxe Room on 28 or 29 October 2017
·  Breakfast for two adults and one child under 12 years old
·  Admission to Music in the Park with Vienna Boys Choir (BBQ lunch inclusive) for two adults and one child
·  Late check-out till 4 p.m. on 29 October 2016, subject to room availability
·  Unlimited high-speed Wi-Fi access
·  Access to outdoor children’s facilities and outdoor swimming pool
·  Access to 24-hour gym