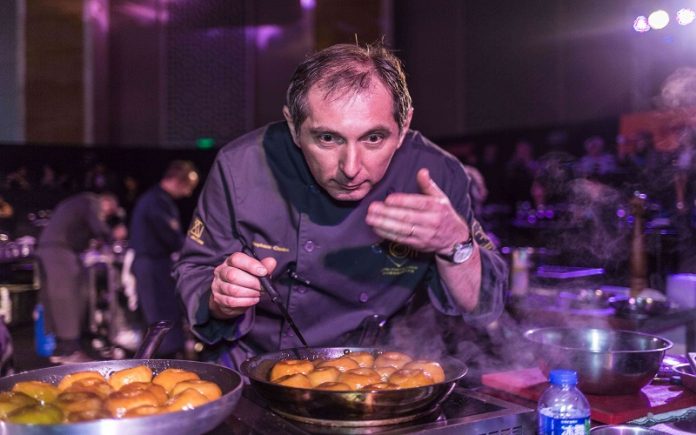 Stéphane Chambon and his father Daniel, both work as business partners and formed a duo. The Chambon team of two created a concept of cooking that captures the traditions of the French Southwest and culinary invention. The duo run the incredibly successful One Michelin-Star family hotel-restaurant Le Pont de l’Ouysse in Lacave, which was first listed in the Michelin Guide in 1905 and is still very popular to this day. It is a place that is proudly on the map of coveted French culinary attractions and was awarded a Michelin rosette in 1987. Recently, Mr. Stéphane Chambon has opened up another restaurant named Bistrot Chambon, which will no doubt match the service of consistent high-standard that has been presented at Le Pont de l’Ouysse.

The internationally well-travelled Stéphane Chambon has worked in an abundance of countries, which includes, England, Jordan, United Arab Emirates, the Phillipines and Thailand. Stéphane is the fifth generation of his family to run the business and Delta Bridges were given access to interview him as he attended the Sofitel Star Chefs 2015 at Sofitel Guangzhou Sunrich.

DB：Before your humble beginnings as an Executive Sous Chef at Le Royal Hotel Amman, where did you first learn your craft as a chef?

SC: Obviously, the family hotel-restaurant has been passed down from generation to generation, so my parents would teach me at an early age about the culinary world and hotel management, which I believe helped me immensely when working and leading many fine hotels and restaurants across the globe. After my educational attainments and working in Le Pont de l’Ouysse, I worked in the highly acclaimed restaurant Hotel Inter-Continental in London, England where I met many professionals that would teach me valuable experience.

DB：In your early years, was there a different lifestyle that you had to adapt to when working in Jordan and the United Arab Emirates?

SC: In Jordan it was small and the environment was surprisingly quiet, yet the culture wasn’t too different from home, but the United Arab Emirates (UAE), it was more of an unfamiliar territory for me. With both Jordan and the UAE in the Middle-East, I wasn’t surprised to find that both were very traditional places, but the UAE was highly technologically advanced. Also, when in Dubai, I had to adapt to the different cooking methods, which wasn’t a problem because I found it to be a good challenge as it helped me grow professionally.

DB：You seem to have been well traveled in your professional career as a chef, but what has been your favorite destination?

SC: Well the Philippines would probably be my pick for favorite destination because of the lifestyle there and also my wife is Filipino. Workwise, Dubai because I had all the ingredients and resources I could ever ask for.

DB：What is your overall culinary philosophy and what dish/techniques exemplify your approach?

SC: Well firstly, a respect for the dish needs to be present and this is done by knowing the product i.e. how to get the best quality out of the dish by performing proper research. The product must be correctly seasoned too and this is very commonly done in France, which is why I believe the best quality comes from my home country.

DB：Has the life of a chef been everything you thought it would be?

SC: I’ve been living in the hotel-restaurant business since I was very young, so I’ve been able to experience everything this life has to offer. So if I’m being honest there has never really been any major surprises and I’ve always known what to expect.

DB：Finally, do you have any special future plans for your new restaurant Bistrot Chambon?