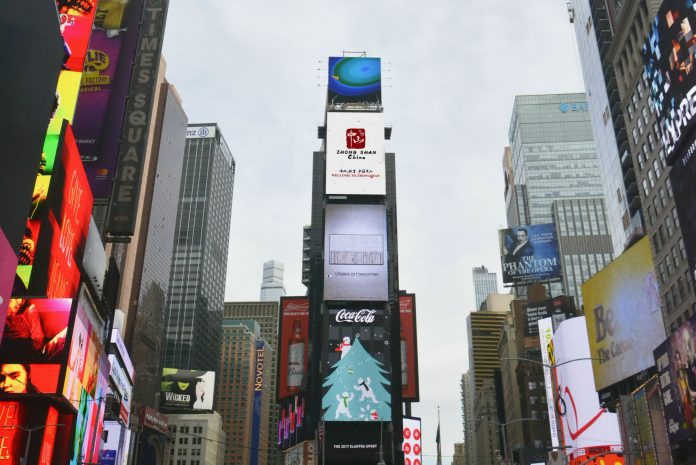 Zhongshan of China, a culturally-rich city and hometown to Sun Yat-sen, a renowned statesman in modern China, presented its brand-new promotion video at the Times Square in New York at 00:00 a.m. Beijing time on 5th Feb., 2019, sending its warm blessings and invitation to the world on the first day of the lunar new year.

According to the Publicity Department of the CPC Zhongshan Municipal Committee, the video, with the theme of “New Era, New City”, shares with the world the most representative elements of Zhongshan through a number of postcards, starting with the featured chrysanthemums’ image of Zhongshan and the former residence of Sun Yat-sen. As the postcards play on, a city of nature, culture and future unfolds.

As for “city of nature”, the video shows the beautiful and attractive natural landscapes including Wugui Mountain, Yakou Rice Field, Changjiang Reservoir, Daliao Reservoir and Zhanyuan Garden etc,. Thanks to the green and livable environment, Zhongshan won over ten awards such as the UN-Habitat Scroll of Honor award, National Ecological Demonstration City and National Forrest City.

Onto the “future” part, the video presents dancing educational robots for all-round education of STEAM (i.e. Science, Technology, Engineering, Arts and Mathematics), and the rotating wind turbines manufactured by Mingyang Smart Energy on open sea, which generate green and clean renewable energy. The Shenzhen-Zhongshan Passageway under construction, one of the key traffic links in the Guangdong-Hong Kong-Macao Greater Bay Area, stretches out and unfolds a brighter future with unlimited possibilities of Zhongshan.

Located at the center of the Greater Bay Area, Zhongshan, adjacent to Hong Kong, Macao, Guangzhou and Shenzhen, boasts the development of transportation. In addition, Zhongshan enjoys a solid base for the manufacturing industry, a complete industrial chain and favorable policies. Specifically, the construction of National Health Technology Park, Sino-Swiss Industrial Park and the state-level Sino-German Biological Medicine Industrial Park are speeding up. The emerging industries, such as advanced equipment manufacturing, bio-medicine, robotics, new energy and new materials, are witnessing rapid development.

With rich cultural heritage, Zhongshan, which keeps opening-up and adheres to the path of green, low-carbon and smart growth, shines in the new era. During the Spring Festival, its brand-new promotion video appears again at the Time Square, presenting an open and cooperative Zhongshan that promotes common development in the world for a shared brighter future.

SOURCE: The Publicity Department of the CPC Zhongshan Municipal Committee

深圳英国日终极攻略！预定你本周六的快乐 | Tips for You at Shenzhen British Day

“到黄埔去吧”有奖征集进行中！| The Picture About Huangpu