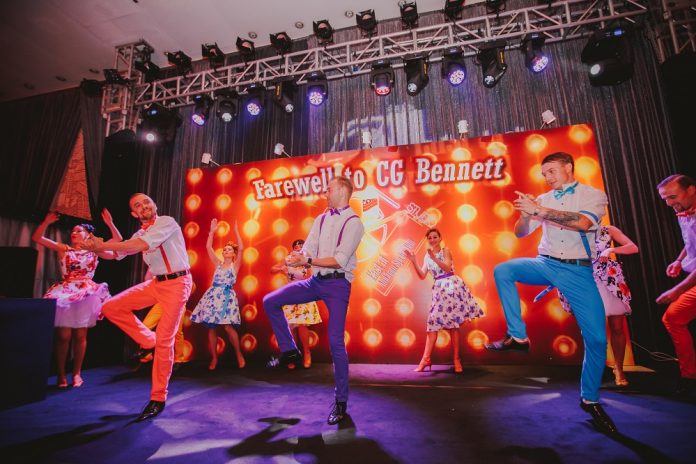 On May 26, the American Chamber of Commerce in South China hosted its Spring Ball at 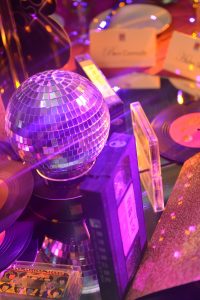 the LN Garden Hotel in vintage American 70s pop-culture style. The theme of the evening “Studio 54 East” brought back a retro era of extravagant music and dance in which everyone felt like a character in a fairy tale. The lobby of the LN Garden Hotel was infused with authentic cultural elements of the era including a vintage Harley Davidson bike, a 360 degree LED screen displaying the photos of the Studio 54 celebrities of the 1970s, and flashy décor. With great music and lighting, the lobby welcomed guests who were decked themselves out in the funky style the 70s with leisure suits, bell bottoms, and platform shoes. AmCham South China President, Harley Seyadin, and Consulate General of the United States in Guangzhou, Charles Bennett, both graced the occasion. After cocktails in the lobby, the guests joined the long queue to the Grand Ballroom amidst crowds cheering in the aisle, reminiscent of the evening scene of the original Studio 54 West outside of which hoards of people used to gather, hoping to get a glimpse of an American celebrity or to enter the club. The tunnel leading to the Ballroom was decorated with a 1970’s celebrity photo collage created a nostalgic backdrop.

Garden Hotel’s Ballroom was transformed in a true discotheque highlighting flashy disco balls, silver-jazzy decor and colorful dance floor. The dinner table had disco ball, old-vintage cassettes, and music discs as centerpieces to represent the groovy music era of 70s. The LED screens played clips of the classic movie ‘Saturday Night Fever,’ reminiscent of funky old times, while groovy performances of famous classic dance numbers, including Dancing Queen and YMCA, got the guests to hit the dance floor and boogie. 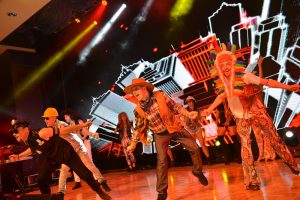 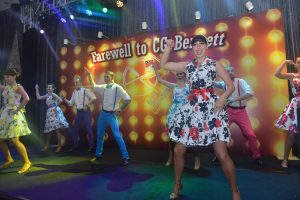 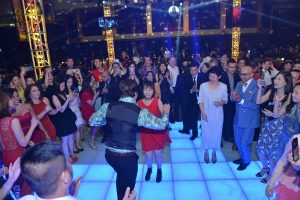 An elaborate feast, presented by the Garden Chefs was inspired by the Italian cultural influence of 70s. It was a classic Italian menu, re-imagined in a modern contemporary way. To begin the nights culinary journey, bread chips made of crisp puccia bread served with a perfectly cured parma ham started off the night. Next, was the classic Mediterranean flavors of red prawns, burrata and basil. With crisp white wine, guests enjoyed a light and zesty cold tomato soup with smoked cod and green chili. ‘Bistecca alla Fiorentina’or ‘steak in the style of Florence’ is a must have on any Italian menu and a perfect main course dish. Offering up the best of both worlds, a “classic Italian” meatball was paired with the steak and served side by side on one giant plate at the center of the table, welcoming everyone to interact and to dine at their leisure. Complimenting the meat was one of the most famous of Italian pastas – Tagliatelle, served with a delicious yellow tomato marinara sauce.

With Pop music, groovy performances, rock-n-roll, a colorful dance floor, an elaborate meal, and vintage décor, everything representing the larger-than-life world of “Studio 54 East” transported guest back to the colorful 1970s.It was a memorable and fun filled evening for all.