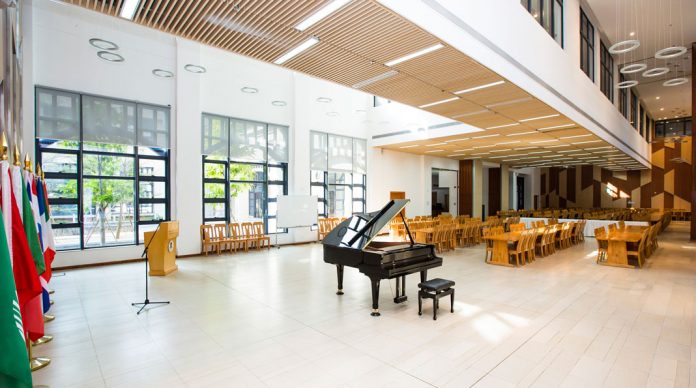 Professor Kevin Thompson, who prefers to be called Kit, is the Master of Moon Chun Memorial College at University of Macau, a position he has held since 2013. He earned a PhD in music in 1983, became founding principal of Birmingham Conservatoire in 1988, director of Dartington College of Arts in 1993, and was appointed the director of the Hong Kong Academy for Performing Arts in 2004. Kit speaks to Delta Bridges about knighthood, role models, and theater of the absurd.

DB: You held the position of Principal at two performing arts institutions in England for over fifteen years. What attracted you to Hong Kong?

KIT THOMPSON: Anna Sohmen, rang me during the middle of my night in Devon and invited me for luncheon in London. From there I met the board, colleagues, and students – they are always the most perceptive and ultimately astute panelists in appointments, I find.

DB: You came to Asia in 2004. Did you expect to be here over ten years later?

KT: Hardly, ‘the past is a foreign country’, LP Hartley said, ‘they do things differently there’. That the past was different, there is no gainsaying, and in this case, it is “a foreign country,” but that is not to mistrust the future or be in any way discontented with the present. For some nostalgia offers escape. For others, we like to mentally reside in the future, and I have been lucky to be given opportunities to be where the center of energy, dynamism, and drive is, and the future full of possibilities and uncertainties. Living outside of one’s comfort zone has always appealed. Like being in a theatre, one is both stimulated and frightened at times, but stage fright enables one to perform at a higher level of concentration, and if one is lucky at a greater level of engagement.

DB: You earned many degrees and hold many titles, but “Teacher” is the one you prefer. Why?

KT: It resonates a particularity of interest, educate in the Latin sense of leading out. And, changing someone’s life, their quality of being, building character of a young person is a particular privilege and carries a very profound responsibility.

DB: What was it like to be conferred a knighthood by France?

KT: Unexpected, and humbling, since there are wonderful rôle models which one hardly feels able to join their company, especially when given an honour by another government. But an opportunity also too to begin to work with French diaspora, the Francophile community in Macao and Hong Kong through Le French May, French Consulate and France Macau Business Association.

DB: Where is your favorite place in Macau? Hong Kong?

KT: With so many UNESCO-listed heritage buildings in Macao, there’s more than one favorite place, but I guess the Mandarin House, Guia Lighthouse and Cameos Square, Morrison Chapel would rank amongst the top.

But the genus loci–spirit of the place–is perhaps more important than the physical construction itself, the Macao Cultural Centre, the Dom Pedro V theater, and the CMM with its cultural salon would also be favorite haunts. For dining, it’s Albergue 1601, Antonio’s and Chef Dominique Bugnand at Vida Rica. He recently recreated a menu featuring legendary dishes of Chef Paul Bocuse, more in keeping with today’s preference for something altogether healthier and lighter. We liked it so much there was a repeat performance.

Penha, Barra and Guia for walking, stravagin’–wandering about musing being open to chance discoveries. Local historian, Jason Wordie says Macau beguiles you; it comes upon you when one is most unsuspecting. A chance encounter, and balconied street view overhung with plants and trailing foliage, viewed at twilight by Portuguese street lamps, Mediterranean aromas and distance music. I spend much of the time in a continual state of some bewildered wonderment.

Swimming at Cheoc Van Beach, or meeting up with students on weekend leadership camps there.

In Hong Kong, it’s HKClub or China Club. David Tang is a friend and traveled pell-mell back from Europe to be with us for the investiture at the French Consulate in HK. His Tang, Tang, Tang, Tang, is full of delectable, as the FT terms them.

It’s walking in the New Territories with a group of Austrian friends, celebrating another friend’s birthday on the Peak and hauling Champagne–and luncheon–up there by haversack, like Sherpa’s trekking the foothills of Everest.

In the UK, it’s a weekend jaunt to Malvern in open top Morgan, Cirencester or Daylesford, or Highgrove Tetbury, in Gloucestershire, or Browns at Oxford. In town breakfast at East Indian Club (Scottish Loch Fyne Kippers + poached egg), patting trophies on the nose and shark’s dorsal fin, then being serious and grown up enough to remember to wear socks and my collar down.

It’s attending the Academy’s scholarship presentation to meet with students receiving a prize given in my name by friends and colleagues so that they too can benefit from the kind of opportunities I was given by a local patron and philanthropist.

Meeting with friends and colleagues in gemütlich tea shops, or celebrating with friends here in Macau and Hong Kong, the ‘best of British’ not in former Prime Minister, John Major sense of a ‘country of long shadows on county [cricket] grounds, warm beer, invincible green suburbs, dog lovers and [football] pools fillers’, even less in an Orwellian, ‘old maids bicycling to Holy Communion through the morning mist’, way, but values of mutual tolerance, social responsibility, respect for rule of law, and for people of all beliefs, faiths, and for those without faith.

And, of course, joshing with my wife and life-long soul mate, Patricia, over something ironic and wry. We share a sense of the absurd and seem to live our lives in a perpetual Theatre of the Absurd. Théâtre de Complicité follows.